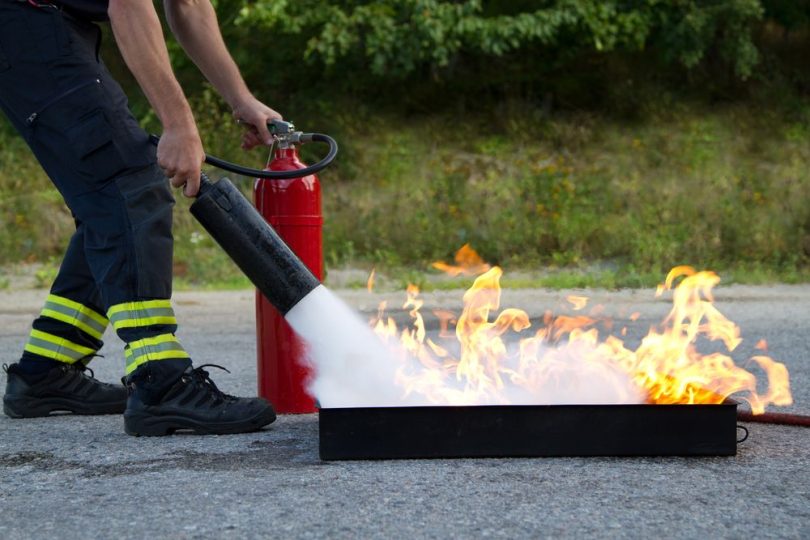 Fire extinguishers have been there for nearly 2 centuries now, saving the lives of countless people who were defenseless and surrounded by the terrifying flames.

According to Joseph Lanzafame from RIT “Most fire extinguishers work by separating the fuel from the oxygen. Since the oxygen has to be in contact with the fuel, if you can coat the fuel with something that keeps the oxygen away, the fire will go out.”

A Close Look at “Fire” 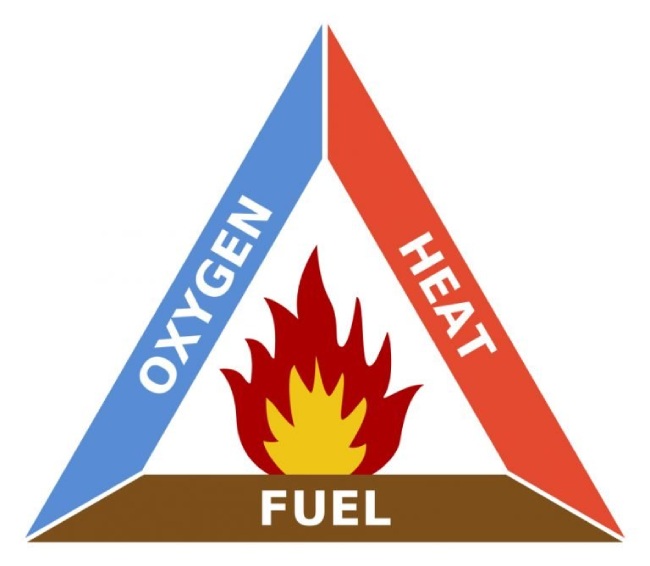 Fires are the consequences of a chemical explosion response, naturally a response between combustive elements and oxygen in the atmosphere. 3 different fundamental factors are involved in producing fire.

Fire burns when all these ingredients are present at once; you can put out a fire by getting rid of any of these 3 components from the triangle effectively.

Taking away the fuel is only possible when the fire is controlled. For instance, the fire will die out on a propane grill when you shut off the gas valve and stop the fuel from flowing.

You might find it harder to get rid of the spark or heat once the fire ignites and keeps on burning.

How a Fire Extinguisher Works Inside

In general, fire extinguishers have 2 different substances inside. 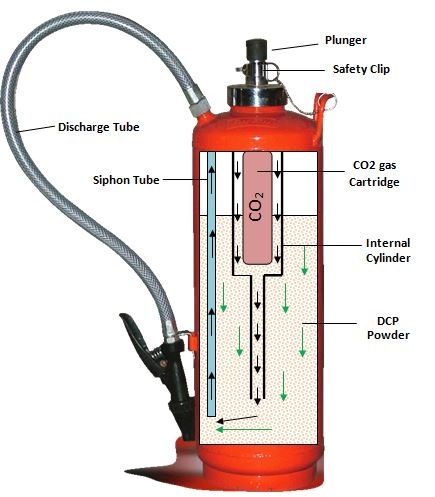 Most fire suppressant reservoirs have a siphon hose inside that leads from the base to the lid, and a spring-loaded control device blockades the passageway between the siphon hose and nozzle.

Towards the top, a smaller cylinder is mounted that contains compressed gas such as liquid CO2 and a pressure relief valve that holds the gas trapped inside.

When you push on the lever, an actuation rod attached to the lever plows the spring-loaded valve downward and makes passage through the nozzle. The sharp footing of the actuation rod pierces the smaller carbon dioxide cylinder inside the extinguisher.

The non-flammable gas outflows downward on the fire-extinguishing chemical blend. This pushes the substance up through the siphon and out through the nozzle head with enough force.

Different Types of Fire Extinguishers and How They Work

Fire can have different characteristics based on the type of fuel it is burning on. So are the extinguishers, you’ll find different extinguishers to extinguish different varieties of fire or fuel.

Water is the most-known and most-effective material for extinguishing the regular fire. Water extinguishers in essence contain water and use carbon dioxide or nitrogen propellant to push the water out.

Powder and pressurized nitrogen propellant together make up a dry powder extinguisher. Dry powder here refers to a chemical blend that absorbs heat. It is melted and coats the fuel to stop the ignition of combustible fumes and block out the oxygen.

In most cases, the powder mixture is composed of oxoammonium phosphate, metal alkali salts, sodium bicarbonate, and potassium bicarbonate. They work well for extinguishing fire from flammable liquids like oils and gas.

A cylinder of Foam extinguisher contains water, foam material, and compressed nitrogen propellant. They prompt an immediate chemical response when pushed out at once and work by absorbing heat and blocking oxygen around the fuel.

These extinguishers contain carbon dioxide propellant and a liquid mixture to remove heat and oppose the oxygen.

As you may know, a large number of fire extinguishers include carbon dioxide (CO2) inside. When the CO2 is thrown straight onto the fire, it displaces oxygen from the fire triangle.

CO2 is, by nature, ice-cold when it’s out of the cylinder which makes it a perfect component to remove fire. CO2 may not be effective at putting out Class A fire as it might not be capable of putting enough oxygen out of place. 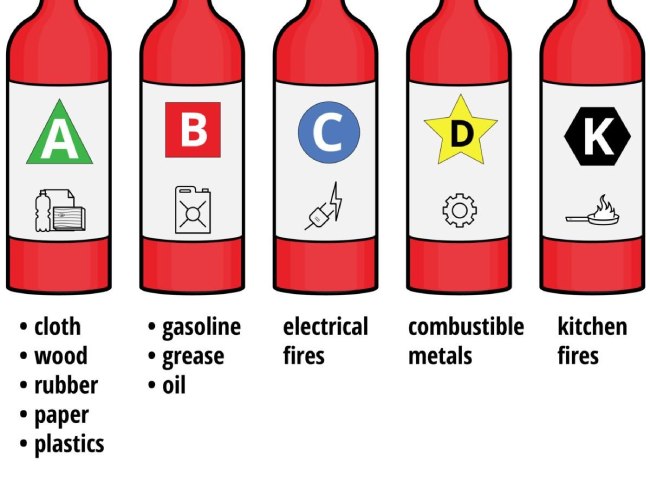 The wrong type of extinguisher can put you in danger and make the fire worse in no time. You should never use water extinguishers on electrical fires as you might electrocute yourself and other individuals nearby.

Fires that involve combustible liquids like diesel, petrol, or petroleums.

How to Use a Fire Extinguisher: Step by Step

Is the extinguisher you have on hand the right type? Check to make sure your extinguisher is the correct type to extinguish the type of fire in front of you.

Note: Fire can be fatal and harmful, run to bring help when it’s out of your hand. Do not try to put the fire out all by yourself unless it’s safe to do so and you are confident about it.

Step back, maintain at least 6 to 8 feet distance from the fire with the extinguisher at hand.

Put out the fire using the PASS method. It’s an easy 4 step method that’ll help you operate with your extinguisher in the right way.

P – Pull the safety pin to discharge the extinguisher. 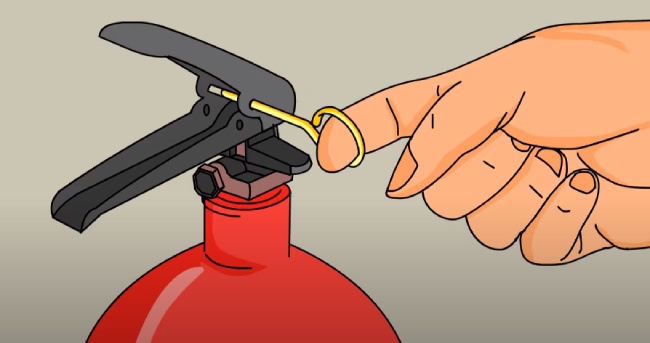 A – Aim the extinguisher nozzle at the base of the fire so you don’t waste your limited resource in vain. 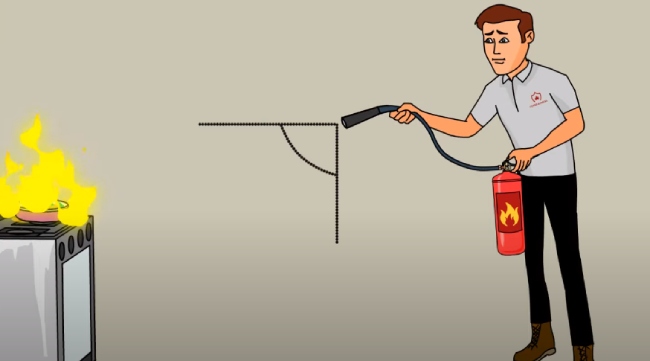 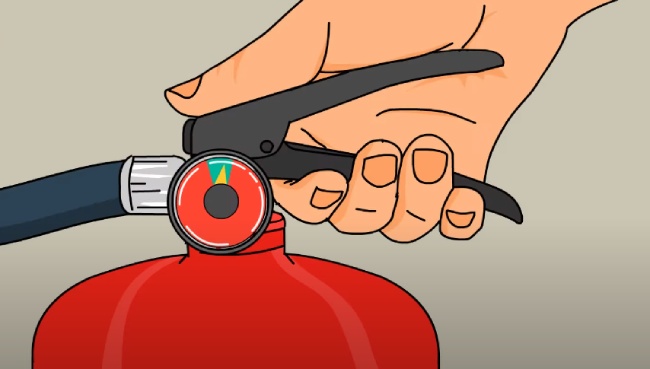 S – Sweep, i.e. move the extinguisher in a sweeping motion until the fire is out – continue to observe the fire for a while to make sure the fire does not flare up again. If it does, repeat the PASS method. 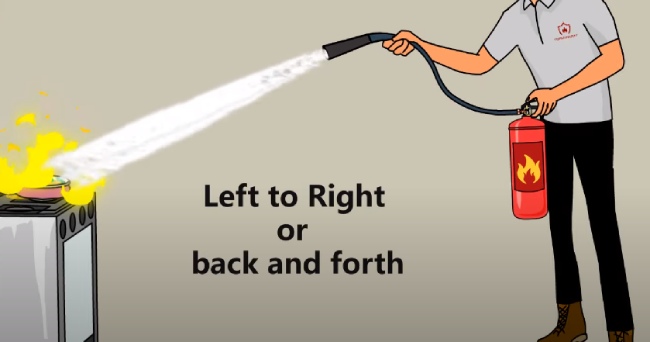 1. What is ABC in fire extinguishers?

Ans: The ABC rating on a fire extinguisher suggests that you can put out 3 different types of fire, which means A – ordinary combustibles such as wood, paper, or apparel. B – liquid combustibles like oil, grease, or gasoline. C – Live electrical departments such as an electrical panel or wiring connections.

2. Which gas is used in a fire extinguisher?

Ans: Most fire extinguishers use Carbon dioxide (CO2) which is a non-flammable gas as the opposite of oxygen to put out the fire.