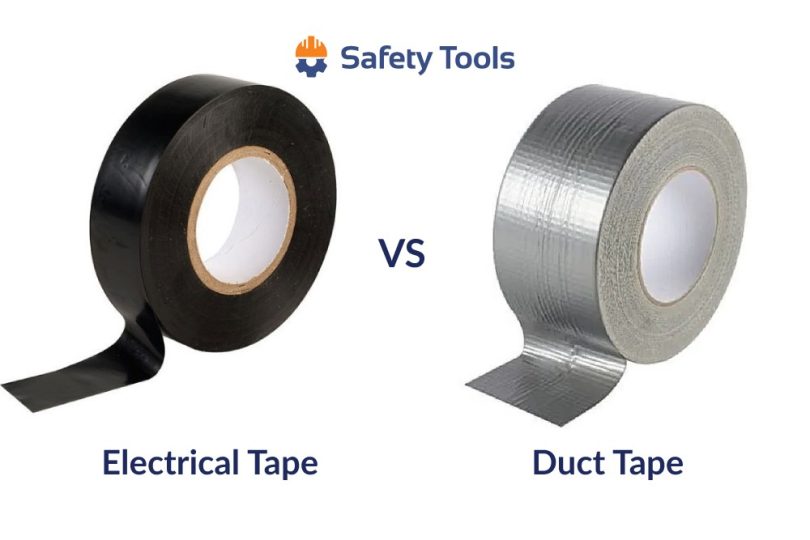 Everyone knows duct tape – the famous adhesive that seems to be used for just about anything DIY-related. But is it the go-to quick-fix for everything?

You will often hear electrical tape and duct tape mentioned but when should you use one over the other? Is the duct tape you see now the same as it used to be?

Keep reading to find out.

Electrical tape is made of PVC and nylon, making it extremely ductile and flexible. It gets its name from its insulating ability, making it perfectly suited to repairing live current-carrying wires and other components.

This is a much more powerful adhesive usually made from cotton or polyester. This “scrim” is laminated against a polyethylene backing. It was originally used to close leaks and gaps in heating and cooling ducts, hence the name.

However, the original tape was made from a type of aluminum foil. The duct tape you commonly see is different, as is not as durable or temperature resistant as its namesake.

If flexibility and ease-of-use is what you’re looking for (or you find yourself fixing wiring) then electrical tape is preferable. However, if strength is what you need, use duct tape.

Electrical tape is small and thin owing to its use as a wiring insulator. It needs to conform to the irregular dimensions of electrical components and wires so you won’t have any trouble wrapping it around awkward features.

This is the opposite. It’s large and comparatively bulky. The tape itself is layered quite thick which is an essential feature when being used to repair damages in high-stress environments (like its namesake).

Generally, it’s useful to be able to manipulate the tape to fit any situation. In this way, electrical tape is extremely useful and might be your preferred choice. Duct tape is versatile, but it might be overkill to use it on a perforated wire.

Electrical tape uses a rubber adhesive suited to jobs where it’s unlikely it will be disturbed for long periods of time. It will last for years if it’s used to maintain protected electrical components.

Duct tape is famous for its adhesive ability. This heavy-duty tape uses an acrylic adhesive meant to be used for a broad variety of DIY and industrial work. This adhesive can sustain most mechanical stresses but is liable to wear off under hot conditions.

When it comes to which has the more powerful; they are both strong in their own right. Duct tape has a more powerful adhesive, but this adhesive can easily melt under heat while electrical tape tends to withstand hot temperatures more easily. Electrical tape is the winner in this case.

As mentioned above, electrical tape is best used for jobs where it won’t be disturbed for long periods of time. While a good insulator, it isn’t particularly resistant to cutting or frictional damage.

Duct tape is made of more hardy materials and is intended to last for a long time in adverse environments. However, both tapes will eventually lose their adhesive ability and will need to be replaced.

In terms of material durability, duct tape wins as it is built for harsh DIY and industrial conditions.

Electrical tape is made of ductile PVC, making it particularly elastic. It can be stretched and reformed to fit most situations.

Made of much thicker and immobile material, it is noticeably less flexible

Being far more elastic, electrical tape is perfect for jobs that need a finer touch.

This type is specifically made of insulating material. You should use it to cover live wires and other conductors so that the current in these components doesn’t discharge anywhere else, especially not into the hands of an electrician!

The usual cotton/polyethylene duct tape around now isn’t quite as good of an insulator as electrical tape, but it can be used as one. Original duct tape, made of aluminum foil, is as conductive as any metal, you should only use it for industrial work that doesn’t involve current carriers.

Electrical tape is a far better insulator than duct tape and should be used for jobs that involve electrical appliances.

For a versatile and easy-to-use tape, electrical tape is a winner.

It can withstand temperatures up to 220°F or around 80°C before it melts or catches fire.

The adhesive is known to readily melt against high temperatures.

Use electrical tape if you’re looking for a strong tape that can withstand heat.

It is UL-listed for work with electrical appliances, meaning it has been extensively tested against a multitude of different requirements around electrical work.

Which you might prefer based is based on the context of the UL listing. Electrical tape has been stringently tested for use in electrical repair and maintenance work, while most aluminum duct tapes are UL listed for work in air ducts, seal connectors, and HVAC equipment

Electrical tape can come in different colors for practical color coding. Tape colors usually match the wire type (live, neutral, ground/earth) to help with identifying what wires have been covered.

Duct tape comes in a large array of different colors, but these colors are purely cosmetic and don’t serve any practical purpose.

Color-coding is critical if you work with live wiring. On the other hand, it is helpful to organize what’s what when you color code with duct tape. In terms of practicality, electrical tape color variety is more important.

Electrical tape doesn’t harden as fast as duct tape does. Plus, its adhesive is somewhat weaker, so it is easier to peel from a surface than duct tape is.

Made of more material and designed for strength, duct tape tends to be slightly more expensive than electrical tape.

If you’re on a budget, electrical tape is better for you.

Things Electrical Tape and Duct Tape Have in Common

Electrical Tape – When to Use It?

Electrical tape is an insulator designed for use in electrical repair and maintenance work. They can be used to wrap exposed wires, secure current carriers, and cover solder joints. Although not advisable, you can also try them for other tasks such as packing and some sealing jobs.

Duct Tape – When to Use It?

Duct tape is a sturdy adhesive material. If you use the aluminum type, then it is perfect for covering air leaks, seal connectors, and hot/cold ducts. Off-the-shelf duct tape is less resistant to temperature flux and is better for packing simple indoor and outdoor DIY jobs.

1. Can I use electrical tape to insulate wires?

2. Can I use masking tape instead of electrical tape?

Ans. Masking tape is not UL listed for electrical work. It does not insulate as well as electrical tape and is more flammable than the former, making it dangerous to use in electrical appliances.

Ans. The melting point is around 200°C or about 400°F. Otherwise, it’s an inflammable material and won’t catch fire.