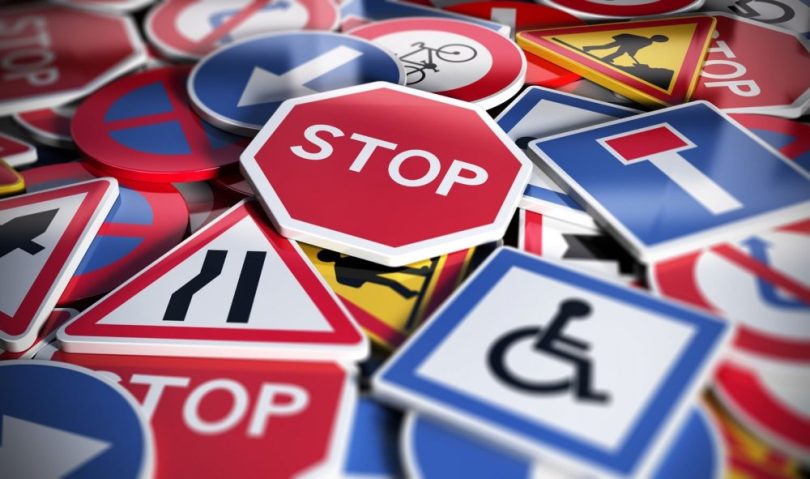 Safety signs and symbols come under many categories, but they can usually be divided into two major types based on their intentions –

a) For general safety protocols

b) For labeling hazardous and toxic elements

Based on that, we’ve further divided safety signs and symbols into seven different types that can be seen everywhere around you e.g. in transportation, workplaces, construction sites, public places, etc.

Let’s see what each of these symbols mean in detail. 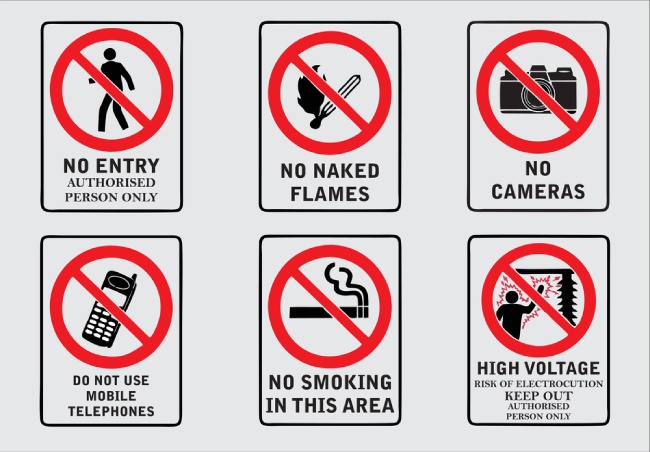 They forbid behaviors that may cause danger to not only one individual but also to other occupants in that area as well.

Prohibition signs usually contain “DO NOT” commands to restrict people from doing something in a certain area that may result in an unwanted scenario. Their examples include NO ENTRY, NO EATING/DRINKING, NO SMOKING, or DO NOT USE.

They are usually displayed as a black imagery of the prohibiting behavior or action on a white background with a red circle around the imagery and a diagonal line at a 45-degree angle through the red circle. 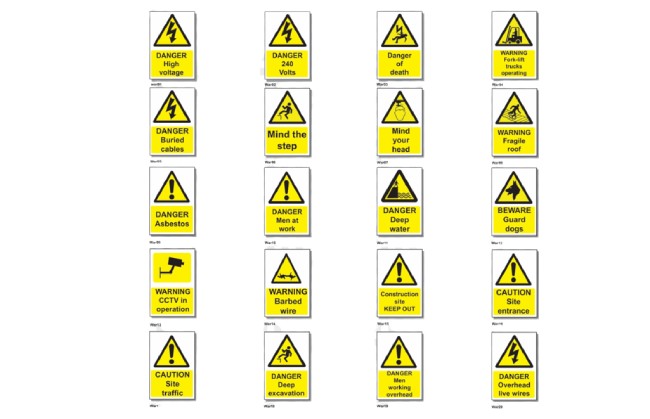 Warning signs are used to warn about an action or an object that’s a hazard. They are commonly seen to generate awareness of a nearby danger source e.g.  a combustible liquid store or a slippery surface.

They usually have a black imagery of the particular hazard/danger inside a black equilateral triangle on a yellow background. The texts in the warning boards are in black. 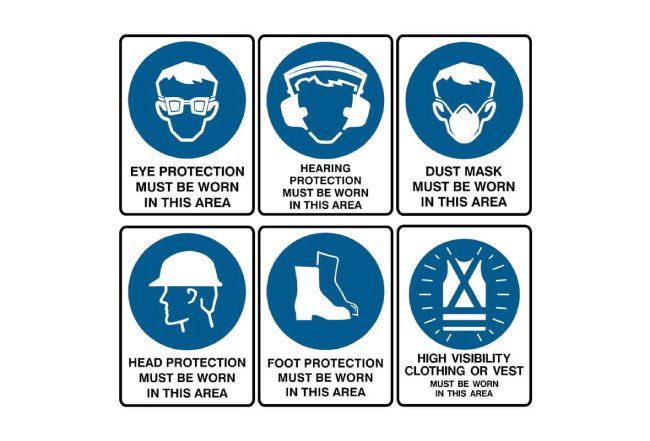 Mandatory signs command a specific action that must be followed in certain circumstances. They are used for such commands as “Do This”, “You Must”, or “Obey” to protect people from possible dangers where precautions are needed.

They appear as a white imagery or symbol and text within a blue circle on a white frame. These mandatory signs can also appear with just a single word without any symbol or imagery. The words are written in black on a rectangular white background. 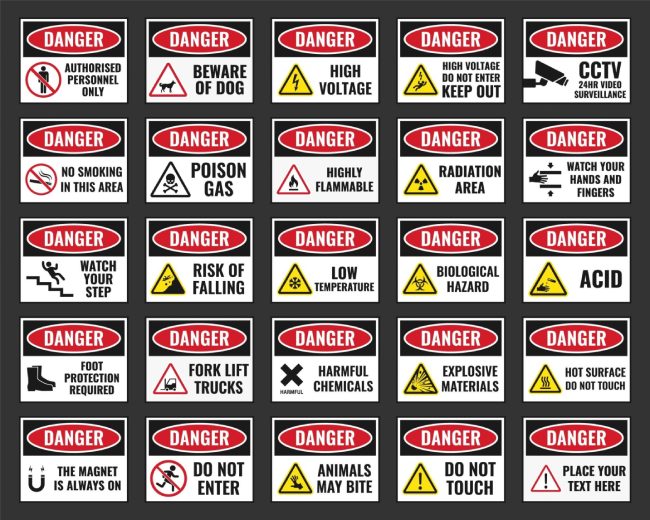 These signs are used to warn people about life-threatening conditions. Workplaces that have high-powered machinery, high voltages, acid, and volatile compounds are bound to use danger signs.

These signs contain the word “DANGER” written in white color inside a red oval on a black surface. 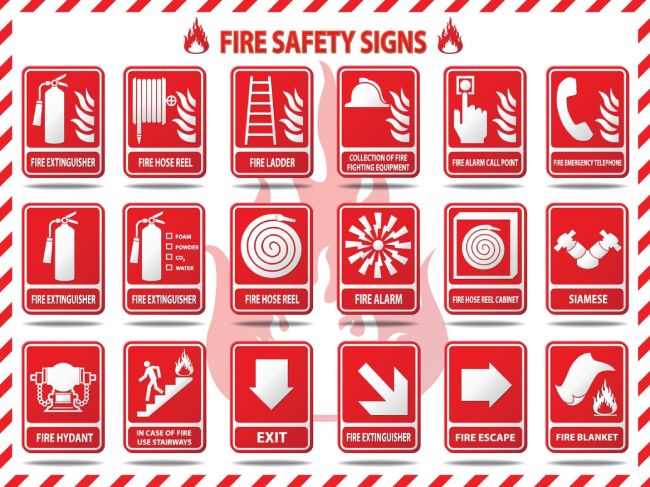 Fire signs give information about fire hazards and fire-fighting eqipment around you. These signs allow you to act quickly and prevent spreading of fire when a fire breaks out.

Fire Signs are rectangular or square in shape with a white imagery or text on a red background. 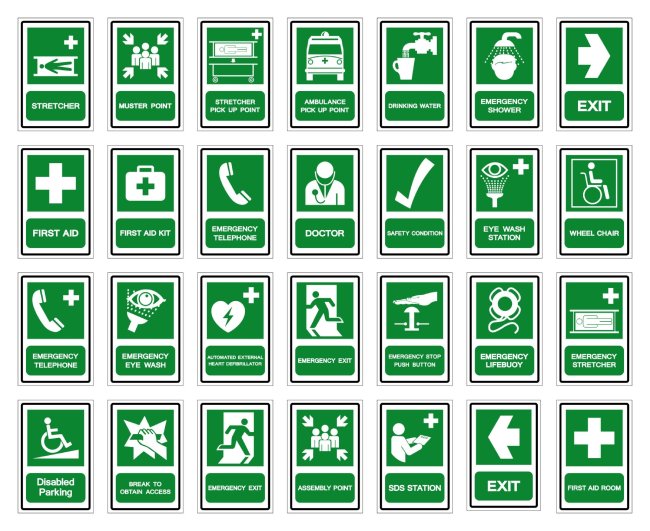 Emergency signs are used to give information about directions to or locations of different emergency facilities that are supposed to be used when something goes wrong.

Signs like “FIRST AID KIT,” “EMERGENCY EXIT” or “EMERGENCY PHONE” can be categorized into emergency signs.

They appear as a green square or rectangle shape with white imagery and text in the middle. Similar to mandatory signs, they can also appear with just a word. 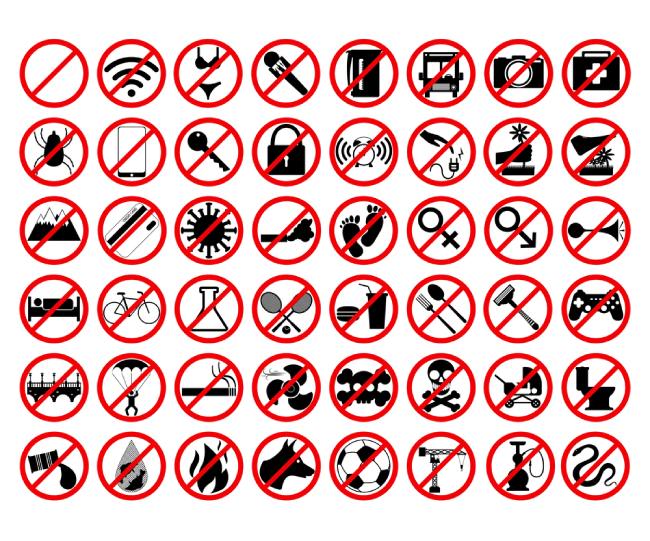 These signs are used to indicate limits on a specific activity like speed limit, height limit, vehicle weight or other parameters.

They have limit numbers written in black inside a red circle on a white background.

1. What do the colors of safety signs indicate?

Ans: The red color used in prohibition safety signs means to stop or evacuate or shutdown; while blue means a safety precaution that is mandatory like wearing PPEs.

On the other hand, yellow/ amber indicates things to be cautious of in a situation while green is used to mark things like emergency escapes or first aid availability.