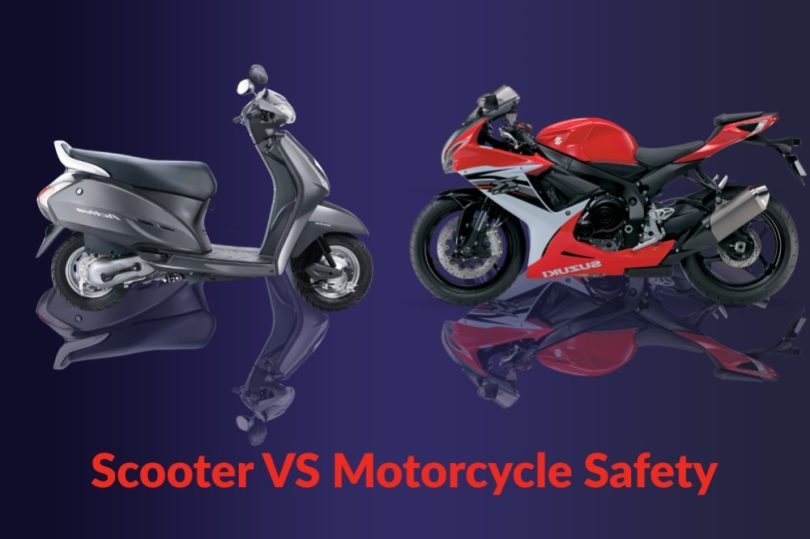 If you’re wondering about which is safer between a motorcycle and a scooter, this mainly depends on how you ride rather than what you ride on.

However, there is a consensus that scooters are safer than motorbikes. But this is not true because bikes usually have better control, brakes, and safety features than scooters.

Let’s dig deeper and see which of the two is safer in different conditions.

None is safer than the other for commuting since this depends on the road conditions. Scooters are better for quiet roads because they are lighter and easier to handle.

On the other hand, for urban areas with heavy traffic, a motorbike will be safer because you’ll be able to keep up with the traffic with better visibility. They are also safer at higher speeds with bigger wheels and better handling capabilities.

Bikes have more speed and better suspension and braking systems that are required in high traffic roads to keep up with the speed of other vehicles.

Scooters are comparatively smaller than a bike which makes them less visible to other motorists. Lower visibility and less speed makes them an unsafe means of transportation in high traffic areas.

Motorcycles can accelerate a lot of power in a very short time period. This can allow you to keep yourself safe in situations where speeding up is the right choice of action rather than braking.

For example, if a car suddenly turns into your lane, hitting the brakes can cause a rear-end collision.

High RPM and a manual gear system makes it easy to go uphill.

The more powerful engines and the better grip and traction give bikes an edge over scooters in handling steep hills better.

The suspension systems of bikes help dampen the shocks and vibrations that occur on bumps, rough roads while at the same time provide support in braking or steering when cornering.

None of them provide better safety in harsh weather conditions. However, the bigger wheels, deeper tire tread, ABS and RPM control of bikes give you better control.

When hitting bumps or potholes, the smaller tires of a scooter tend to get deflected due to the less gyroscopic effect.

The larger tires of bikes cover more surface area, which helps roll over a few holes whereas a scooter tire falls off and causes a serious jolt in the suspension.

How safe are bikes?

Bikes usually have better braking systems, are more stable, and offer a smoother ride when compared to a scooter. But they are prone to accidents due to their high speed.

How safe are scooters?

With proper safety gear on, the risk of fatal injury and death is lesser on a scooter due to its slower speed and easier handling. But you’ll rarely find a scooter rider wearing much gear except for an open face helmet.

In the event of an accident, you will find it easier to jump off the scooter as there is plenty of legroom. Also, since your legs will be in the footwell, the weight of the scooter won’t fall on your legs after a fall.

However, this is not the case with bikes. It’s difficult to jump off the bike and if not fitted with an engine/crash guard, the weight of the bike may be on your feet.

The Florida Traffic Crash Records Database (FTCRD) recorded that between the years 2002 to 2008, 5,660 scooters were involved in crashes and among them 18% resulted in fatal injuries.

Studies also showed that differences in fatalities were somehow related to the situations that the vehicles were in. An estimated 15% of scooter accidents and 23% of bike accidents occurred for speeding, drunk riding, dangerous driving, or traffic rule violation.